Sun City Vein Doctors Explain the Stages of Vein Disease, and Why You Want To Seek Early Treatment 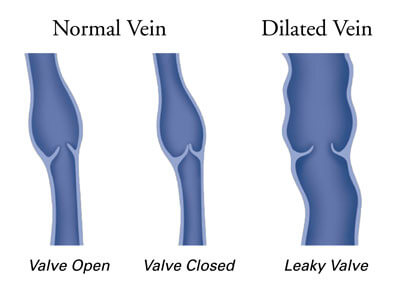 se veins and have been experiencing negative symptoms but have been putting off seeking treatment, this blog is for you. We understand that it’s tempting to think that the leg pain and swollen, achy legs will go away, and that the swollen veins themselves will somehow “get better on their own.”

Speaking as experienced Sun City vein doctors, we have to tell you that it’s not likely that your varicose veins will “get better on their own.” It’s much more likely they’ll get worse.

What is chronic venous insufficiency?

CVI occurs when the tiny, one-way valves that control the flow of blood through your veins become damaged. In normal veins, these valves open to allow blood to flow through on its way to the heart, and then close again. When these valves become “leaky,” they allow blood to flow back into the veins and collect there. This is what causes these veins to become enlarged and take on the bluish-purple color of deoxygenated blood that you can see on the surface of the skin as spider veins and varicose veins. This is just the first stage of CVI, however.

The six most common stages of CVI (chronic venous insufficiency)

Although each case is slightly different, the following six sets of symptoms appear often enough and in enough patients that we can safely categorize them as reflecting predictable “stages” of the disease.

What can you do to prevent your varicose veins from getting worse?

Have them treated, and as early as possible. As noted above under stage two, this is the point at which varicose vein treatment in Sun City is easiest. In some cases, symptoms at this stage can be successfully managed with conservative treatments such as diet, exercise, and the use of compression stockings.

If you allow the disease to progress to higher stages, it can still be treated by varicose vein specialists in Sun City, but it may require more aggressive treatments such as sclerotherapy, radiofrequency ablation, laser therapy orVenaSeal™. To find out what stage your vein disease is in and which treatment options are applicable, give our experts a call at 888-377-7122 or go online to schedule an appointment. Our talented team of vein experts is happy to assist you.