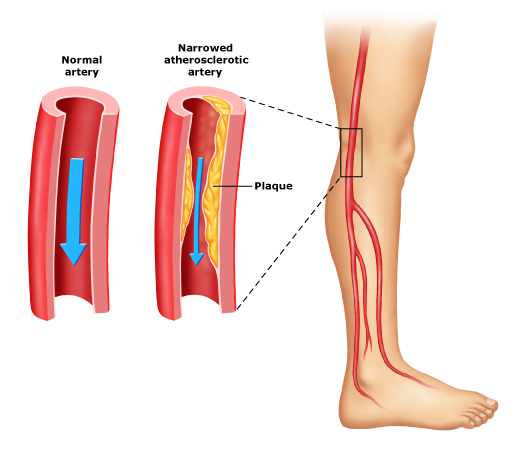 In our many years of practicing medicine, we’ve found that there are two medical terms that almost always confuse our patients. The two terms are peripheral artery disease (PAD) and peripheral vascular disease (PVD).

We do understand the confusion. These two terms sound similar, as if they’re describing the same disease or medical condition. It’s easy to mistake one term for the other, and use them as if they mean exactly the same thing.

In this article we’ll explain what these two terms really mean, and what makes them different from one another. We do this because we’ve noticed that NOT knowing the difference can cause people problems when they start looking things up on the Internet, or searching for the right type of doctor to treat their circulatory problems.

What is peripheral artery disease (PAD) – the slightly longer explanation

PAD (the specific disease) is caused by the buildup of a fatty, sticky substance called plaque on the inner surfaces of the arteries leading to your legs. This condition is known as atherosclerosis, but you may have also heard it referred to as “hardening of the arteries.”

No matter what you call it, it’s dangerous. The narrowing of the arteries restricts the amount of blood flowing to the legs, feet, and toes. Your lower extremities can’t get the oxygen and nutrients they need to stay healthy. So they begin to fail, in many ways. Common symptoms of PAD include leg pain, sores and wounds that won’t heal, and loss of mobility. Extreme symptoms of PAD include tissue death (gangrene), which can lead to amputation.

What is peripheral vascular disease (PVD) – the much longer explanation

As noted above, PVD refers to a number of different conditions. Some of them also affect arteries. Blockage to the coronary arteries feeding the heart, for example, can cause angina or a heart attack. Blockage in arteries feeding the kidneys can cause high blood pressure and heart failure. If arteries leading to the brain become blocked, the result can be a stroke or transient ischemic attack.

It’s important to remember, however, that peripheral vascular disease is a “group term,” and also involves diseases that affect the veins. The most common of these vein diseases is venous insufficiency, which can lead to varicose veins, in which the affected veins become swollen and discolored. More serious vein diseases can be caused by thrombosis, which is the formation of blood clots. These clots impair proper blood flow, just as atherosclerosis does, but they are in many ways more dangerous because they may not stay where they formed. With deep vein thrombosis (DVT), the clots can break off from where they started and travel to the lungs. This can lead to a pulmonary embolism, which can be fatal.

There are many other types of circulatory disease contained under the PVD “umbrella.” Aneurysms are bulges that form in the walls of blood vessels, and that can become dangerous. Lymphedema is a condition that blocks the lymph vessels and keeps them from draining fluid from tissues and supplying them with immune cells.

The difference between these two terms starts to affect you personally when you go to the Internet to look up information about them, or seek doctors who can treat them. What you’ll find is that many websites aren’t careful about making a distinction between PAD (the disease) and PVD (a whole range of diseases).

This can lead to confusion. If you have been diagnosed with PAD (the specific disease) for example, and go to Google looking for the best doctors who treat it in your area, it’s not going to help to be referred to doctors who may treat PVD (the larger group of diseases), but who may have little expertise in treating peripheral artery disease per se.

At Comprehensive Interventional Care Centers, we are famous for providing the best peripheral arterial disease treatment in Arizona. Some of our doctors also treat vein diseases and other forms of peripheral vascular disease. But if you’re looking for someone who really knows PAD and specializes in treating it, that’s us. Give us a call at 888-377-7122 and make an appointment to speak with our talented team of PAD experts.